“Brilliant session – all doctors should attend one!”

This week we hosted a Death Cafe for a group of doctors who are completing the UCLH GP training programme. We were incredibly excited about this opportunity. Given the last 18 months of the pandemic it felt important to provide a space for doctors to think about, and reflect on, their experiences of death, dying and grief. The unique thing about a Death Cafe is that there is no agenda, no themes or facilitation; this allows the conversation to be led entirely by the people in the group.

We were also curious to see how attending a Death Cafe, might change how comfortable the doctors felt talking about death and dying.

To get the discussion started we asked the doctors to share with each other how comfortable they felt talking about death and dying and to give themselves a rating on a scale of 1-10.

At the end of the Death Cafe we asked the doctors to complete an online feedback form which included rating themselves, again, on how comfortable they now felt talking about death and dying. 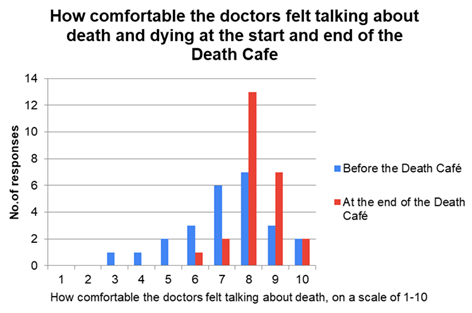 As part of the feedback we also asked the doctors, ‘What will you do, or do differently as a result of attending the Death Cafe?’ and ‘Is there anything else you think we should hear?’

The feedback was overwhelmingly positive.

In response to ‘what would do, or do differently’ there were many comments about being more open and talking more about death with family and patients. Some other comments were:

“Try and find positive ways to improve an expected death”

“The role of the GP at the end of life and how important it is, rather than just handing everything over to the palliative care team”

From the other comments we received it was clear that the doctors really valued the Death Cafe format and appreciated being given this experience.

“Really great session, it was nice to talk without prompts/discussion points and just let the conversation flow”

“This was great! I think this would be something really helpful to have regularly as part of the teaching programme”

If you would like us to facilitate a Death Cafe for your organisation do get in touch and take a look at my Death Café Facilitation page.